May 13, 1950 was a big day in Grinnell—and not only because on that day Stevie Wonder was born in Saginaw, Michigan.  No, May 13, 1950 brought Grinnell happy news much closer to home: on that day triplets were born to William and Alice Evans in Grinnell's St. Francis Hospital. Because triplets were so rare, it was a very big deal when Jerilyn, Carolyn, and Marilyn Evans made their first appearance in Grinnell, Iowa.
In 2014 (the most recent US data available), the number of triplet and higher-order multiple births in the United States fell to its lowest rate in twenty years: 113.5/100,000 live births. The overwhelming majority of these multiple births were triplets—4233—whereas the number of quadruplets (246), quintuplets and higher-order multiples (47) was minuscule. Twins, on the other hand, were much more common than triplets: in 2014, for example, twins accounted for 135,336 multiple births.

But if in recent years the number of multiple births in the US has slowly declined, for the preceding several decades numbers rose dramatically, largely as a consequence of assisted reproductive technologies. As recently as 2003, for example, 7110 triplets were born in the US, a large increase over the 1990 data which counted only 2830 triplets.

Before the availability of assisted reproductive technologies, multiple births were much less common, even if the numbers are not easy to tease out. According to one massive study of more than 72 million live births in the US between 1915 and 1948, one set of triplets was born for every 9126 deliveries, whereas twins could be expected once in every 90 deliveries, making twins about one hundred times more common than triplets. Data from 1949 Iowa, as reported in the June 6, 1950 Des Moines Register, seem to confirm these numbers; the newspaper reported that in 1949 six sets of triplets had been born across the state compared to 652 sets of twins—more than 100 sets of twins for every set of triplets. Data like these undergirded the syndicated health affairs columnist—Dr. Bundesen—who wrote in the November 20, 1950 issue of the Marshalltown Times-Republican that triplets could only be expected once in more than 9400 US confinements.
It is not surprising, therefore, that when the Evans triplets were born in 1950 Grinnell, much was made of their arrival. Two days after their births, the Grinnell Herald-Register reported excitedly above the fold on its front page: "Triplets Born Here!" To emphasize the singularity of the event, the newspaper added that the "Odds [of triplets are] 8000 to 1," which seems to have been at least approximately accurate. The article went on to provide name, weight and exact time of delivery of each girl: Marilyn, 3 lbs., 8.5 oz., born at 10:59 PM; Carolyn, 4 lbs., 6 oz. at 11:03 PM, and finally Jerilyn, 4 lbs., 2 oz. at 11:20 PM. No photo accompanied the report, however; a subsequent article announced the newspaper's desire to publish a photograph of the babies, but observed that "thus far [the triplets] are being handled as little as possible, and a picture has been impossible."

Finally, on the front page of the May 25 edition of the Grinnell Herald-Register there appeared a photograph of the triplets, their mother, and Sister Pauline, a well-known nurse at St. Francis hospital.
The babies, whose birth weights were low compared to the norm, remained hospitalized for about a month, gradually gaining weight. A brief report on the June 15 issue of the Grinnell Herald-Register announced their release, remarking at the same time that each of the girls had gained about two pounds during their hospital stay. Their mother used the newspaper to thank the Grinnell merchants who had provided the family with gifts and also to thank the doctor who had delivered and cared for them, Dr. J. C. DeMeulenaere.

Leaving the hospital did not mean heading to a home in Grinnell, however. Mr. and Mrs. Evans actually made their home in Kellogg, living in the same house where (improbably) some thirty years earlier triplets had been born to Mr. and Mrs.  O. L. Mulford. But the Grinnell newspaper reported somewhat optimistically that the Evans family hoped to find a new home in Grinnell, inasmuch as Grinnell had been so generous to them when the triplets were born. Whether Mr. and Mrs. Evans sought a Grinnell address or not, a new home for the Evans family in Grinnell apparently never did eventuate. Instead, Mr. Evans, who at the time of the triplets' birth had been a salesman for the Curtis Candy Company, about a year later took a job in Des Moines with what became Martin Marietta, and the family moved to Des Moines.
Perhaps precisely because the Evans family did not remain in the area, the Grinnell newspaper made no further mention of the triplets; their fame had risen and fallen in harmony with their closeness to Grinnell. Now resident elsewhere, the little girls merited no further coverage. But the Des Moines Tribune, the afternoon newspaper in the Evans family's new hometown, did take note of the triplets, publishing a photograph of the girls on their second birthday. The caption identified each of the girls and also provided characterizations offered by their mother:  "Carolyn is 'the natural leader' of the triplets," the paper reported, saying that she was somewhat independent, whereas Jerilyn and Marilyn "nearly always play together."

The Des Moines Register, however, the city's morning newspaper, never did report on the Evans triplets, even if occasionally it found space to report on triplets born elsewhere. For example, the June 24, 1951 Register reported on the Winterheimer triplets born in Evansville, Indiana, and the October 3, 1952 Register carried news from Pittsburgh, Pennsylvania, where Mrs. Irma Griser had given birth to her fifth set of twins, who were added to the triplets to whom she had given birth earlier. Later that year the Register published a photograph of the eight-month-old triplets of Mr. and Mrs. Gerald Hill of Fullerton, California, who had just gotten their social security numbers. To be sure, in late 1949 the Register did take note of the arrival of triplets in Des Moines—the Hickman triplets who were born just before Christmas that year. But the paper was just as likely to report on the birth of triplet calves, as it did in the January 9, 1952 issue.

In any event, the Evans triplets attracted little further attention from the media. The family, which had added yet another child, born about eighteen months after the triplets, moved several times within Des Moines, but the triplets seem to have prospered, regardless of where the family resided. All three girls attended Roosevelt High School, graduating in 1968. By this time each had developed her own career preferences, some of which were evident already at Roosevelt. Carolyn, for example, who went on to become a nurse after attending Broadlawns School of Nursing, at Roosevelt assisted the school nurse, and belonged to the Red Cross Committee as well as to the Future Nurses club, of which she was president her senior year. Marilyn, who later attended Drake University to acquire her teaching credentials, belonged to Roosevelt's Future Teachers club, and was as well a member of the Leaders Club. Jerilyn, who later became a successful businesswoman, belonged to the Pep Club, the Riders Club, and the Blue Cadets. 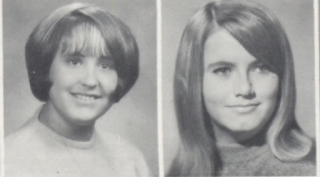 ****
So far as I know, no other triplets were born in Grinnell after the Evans girls (although triplets like the Capers children, who had been born elsewhere, moved to Grinnell in the 1970s). Prior to the Evans triplets, however, Grinnell had been the birthplace of another set of triplets: in December, 1895 Dora Lucas, an African American woman, had given birth to triplets in the Lucas family home at 1517 West Street, Grinnell.  Like the Evans triplets, the Lucas babies were all girls; according to the short report in the December 3, 1895 Montezuma Democrat, the Lucas girls arrived in good health, weighing "5, 6, and 7 pounds"—rather surprising weights for triplets, especially then.

On the face of it, the 1895 report shares some of the enthusiasm of the 1950 Grinnell story. The Montezuma paper, alluding to Grinnell's pleasure at the new arrivals, asserted confidently that the little girls would be "god-children to half the city." Moreover, the newspaper predicted that, when spring arrives, "one of the finest special order baby cabs...shall be placed at their disposal." Whether the Lucas triplets ever received the promised baby carriage is not known, but the Montezuma newspaper undercut its own enthusiasm by un-selfconsciously twice describing the African American children as "pickaninnies."

In Grinnell itself, however, the arrival of the Lucas triplets seems not to have generated much attention. The 1895 Grinnell Herald printed no feature article of the sort that later greeted the Evans triplets. Only a brief note two weeks later humorously denied that the Lucas children would be named Faith, Hope and Charity (inasmuch as their father was a minister in the Methodist Episcopal church), but there was no list of merchant donations, no additional report on the babies' welfare, and of course no photograph or feature story.

As rare as triplets were in those years, it is difficult at this remove to explain the difference in reactions from the local press between 1950 and 1895. Was the relative silence of the 1895 Grinnell newspaper a function of race, as the Montezuma newspaper's report rather awkwardly indicates? Or was it a function of different perceptions of news and the technology of reporting that news? Did the editor of the Grinnell Herald, which regularly placed obituaries on page 1, think that births--even the birth of triplets—was not in fact news of the sort that usually earned readers' attention?

No obvious answer presents itself. Instead, we are left to savor the 1950 stories that excitedly welcomed to the world three baby girls, who had shared their mother's womb for the preceding nine months, and who made their appearance in Grinnell's St. Francis Hospital.
Posted by Dan Kaiser at 6:54 AM No comments: