Some of you will know that I enjoy reading mysteries and police procedurals. In many ways, the investigations of police and private eyes call to mind the research behind historical study, so my interest in these books is not hard to understand. Because there is a surprisingly large number of these books out there, I find myself sometimes discovering authors whose work I had never before known about. One such discovery was Stuart Kaminsky (1934-2009), who taught film studies at Northwestern University and Florida State University. Along with screenplays and academic studies devoted to film, Kaminsky published numerous mysteries, including one series that starred a Russian policeman, Porfiry Rostnikov—in fact, that's how I first encountered Kaminsky, having received a recommendation from a Russian historian friend. Kaminsky created another series based on a Florida private investigator, Lew Fonesca, and yet another that focused upon a Hollywood investigator, Toby Peters.

What brings me to talk about Stuart Kaminsky on this blog? Well, this winter, while reading The Last Dark Place, a 2004 entry in yet another series that Kaminsky authored (this one centered on a Chicago police detective, Abe Lieberman), I was surprised to encounter a reference to Grinnell. Interviewing Tony Imperioli, a suspect, Detective Lieberman asks,

"Boys graduated. Tony Junior's a lawyer. Gene's a computer something. Adrienne, she is studying literature at Grinnell. Ever heard of it?"

I wondered whether this was a one-off thing, but soon found two more references in books from the Lew Fonesca series. In Denial (2005) one reads about someone who wore "an extra-large gray Grinnell College T-shirt," and in Midnight Pass (2003) the reader meets a girl who just graduated from high school "and is going to go to Grinnell." Devil on My Doorstep (1998), one of the Rockford Files, introduces someone who wears a "sweat suit with GRINNELL COLLEGE in green letters"; turns out that he "taught at Grinnell for more than twenty-five years." 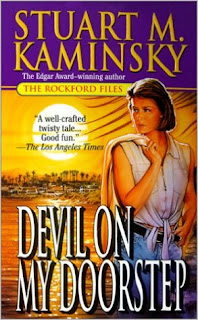 OK—one reference, maybe even two references, could be an accident—a mention by a neighbor or something overheard on an airplane. But Kaminsky clearly thought of Grinnell in a more focused way that did not seem accidental. What did Stuart Kaminsky have to do with Grinnell and how did the name keep popping up in his fiction?

Sounded like an interesting question, and, always game for a search, I began the quest. Searching college sources seemed the best bet, so I ran searches through the college special collections archive, thinking that maybe Stuart might have attended Grinnell.  No luck, so I searched the college website (did he visit to give a lecture?), catalogs (might he have taught here?)—but I could find no reference to Stuart Kaminsky—none!

Not long ago the entire set of the college newspaper, the Scarlet and Black, was made available and searchable on-line, so ran "Stuart Kaminsky" through it—again with no luck. Now I was pretty certain that he had never been a student, had never visited to give a lecture or teach a course. But a second thought occurred to me: might he have had a child or sibling attend Grinnell? I knew from reading some on-line biographies that he had had several children from three marriages, so I searched the S&B another time, using only the family name. And there I found reference to a certain Lucy Kaminsky. In a September, 1999 article about the opening of a McDonald's restaurant in Grinnell, the newspaper took several quotes from Lucy Kaminsky, identifying her as a first-year college student who was also a McDonald's enthusiast.
Could Lucy be related to Stuart Kaminsky? His New York Times obituary mentions that Kaminsky was survived by a daughter named Lucy, one of three children from his first marriage, so I searched the college alumni database. Sure enough, there was a Lucy Kaminsky, here identified as a philosophy major from the class of 2000. Colleagues in the college's Philosophy department confirmed for me that Lucy had been a philosophy major and had graduated in 2000. But so far as memory served, neither had ever heard from her any mention of Stuart Kaminsky.

Well?  What the heck? I sent her an email, explaining how I had come across references to Grinnell in the works of Stuart Kaminsky, and asking whether, perchance, she was his daughter? No reply. Too bad. I am pretty well-persuaded that Lucy, who was attending Grinnell when that name first shows up in Kaminsky's mysteries, was indeed the source of the references that reverberated through Kaminsky mysteries for several years after she left college. Confirmation, however, will have to await some other evidence.

###
The whole experience got me thinking about whether Grinnell might have featured in other works of fiction. Grinnellians often talk about Prominent Among the Mourners, a roman a clef that allegedly uses Grinnell College as its backdrop and college professors and town residents as models for the plot. But that wasn't what I was looking for: I wanted to find works of fiction that use Grinnell—straight out!

Into this quandary stepped Dorrie Lalonde, who oversees the local history collection at Drake Community Library. Did I know, she asked, about Robert Heinlein's 1951 sci-fi novel Puppet Masters? I did not, so Dorrie explained to me that in this book Grinnell, Iowa plays host to the landing of the first space ship of aliens. Naturally, I immediately sought out a copy of the book, looking forward to imagining Grinnell infested with aliens whom the novel characterizes as "slugs."
In fact, Grinnell makes only a brief appearance early in the plot; the development of the story wanders far and wide, but makes no further use of our jewel of the prairie once the "slugs" have landed. Still, how in the world did 1950s Grinnell end up having a part in this other-wordly plot? So far as I can tell, Robert Anson Heinlein (1907-1988) never visited Grinnell, never lived in Grinnell, and therefore never had any direct contact with Grinnell.

However, when I reapplied the methodology outlined above, I learned that a certain J. Clare Heinlein (1912-2000) had attended Grinnell College, graduating with the class of 1934. Clare, as he preferred to be called, was a younger brother to Robert, the fifth of seven children born to Rex and Bam (Lyle) Heinlein. Raised in Kansas City, like his brother, Clare attended Central High School there (as his brother had), then Kansas City Junior College for two years before entering Grinnell College in the fall of 1932. A philosophy major (political science minor) who lived in Dibble Hall both his junior and senior years, Heinlein was apparently a very good student, if not deeply involved in campus activities. Just prior to graduation, he was elected to Phi Beta Kappa, and Clare's college yearbook entry mentions his participation in Merrill Debate his junior year. Although Clare went on to a very successful life that included law school, service in the U.S. Army, and culminated at the University of Cincinnati where he taught political science for more than thirty years, for a short time he served as his brother's agent, and perhaps in that role suggested Grinnell as a landing site for the puppet masters.

###
As it happens, however, Heinlein was not the first to plant Grinnell in a science fiction plot. Ray Bradbury's 1950 novel, The Martian Chronicles, also references Grinnell. A chapter titled "April 2000: The Third Expedition" (first published as a short story in 1948) describes a space ship landing on Mars, though the world that greeted the space travelers was far from the usual understanding of the Red Planet.

"The rocket landed on a lawn of green grass. Outside, upon this lawn, stood an iron deer. Further up on the green stood a tall brown Victorian house...all covered with scrolls and rococo, its windows made of blue and pink and yellow and green colored glass. Upon the porch were hairy geraniums and an old porch swing which was hooked into the porch ceiling and which now swung back and forth...At the summit of the house was a cupola with diamond leaded-glass windows and a dunce-cap roof!...Around the rocker in four directions spread the little town, green and motionless in the Martian spring. There were white houses and red brick ones, and tall elm trees blowing in the wind, and tall maples and horse chestnuts. And church steeples with golden bells silent in them."

The three crewmen debate whether to get out of their space ship and explore, but Captain Black opposed the move. When Lustig, the navigator, objects, noting that "it's a good, quiet green town a lot like the old-fashioned one I was born in," Black asks when he was born. "Nineteen-fifty, sir." Black then asks the same of Hinkston, the archeologist on-board. "Nineteen fifty-five, sir. Grinnell, Iowa. And this looks like home to me."
When the men finally venture out, they meet a woman who tells them that they have actually arrived not on Mars, but at "Green Bluff, Illinois" (apparently a reference to Bradbury's childhood home in Waugekan, Illinois). Furthermore, the woman reports that the year is nineteen twenty-six, providing the crew with the realization that, rather than a trip into outer space, they have traveled backward in time, neatly complicating all their understandings.
A few years after The Martian Chronicles Bradbury found another occasion to insert Grinnell into his fiction. Dandelion Wine (1st published in 1957), usually thought to be at least partly autobiographical, includes a small segment about Douglas Spaulding, who was felled by a terrible fever in the middle of a hot summer. His parents placed his cot outside, hoping that the overnight cooling might somehow help the boy. Into this moonlit, summer night "down the street...came the horse pulling the wagon and the wagon riding the lean body of Mr. Jonas...." who talks to the feverish boy, telling him that he is leaving for him two bottles which he should "drink with [his] nose. Tilt the bottles, uncork them, and let what is in them go right down into your head."

Jonas then reads the label on the first bottle:


"Green Dusk for Dreaming Brand Pure Northern Air...Derived from the atmosphere of the white Arctic in the spring of 1900, and mixed with the wind from the upper Hudson Valley in the month of April, 1910, and containing particles of dust seen shining in the sunset of one day in the meadows around Grinnell, Iowa, when a cool air rose to be captured from a lake and a little creek and a natural spring."

Of course, Douglas revives, reminding us that here, as in The Martian Chronicles, Bradbury associates Grinnell with the bucolic world, with healthful and calming forces. But where did he get this idea? How did he come to know of Grinnell?

I admit that I have no answer to this question, although I have searched the usual sources. I could find no reference to Bradbury or his immediate family, nor could I find any mention of his most trusted friends and colleagues—people like Charles Addams, Ray Harryhausen, and Gene Roddenberry.

At this point, therefore, I am stumped, and have no idea how Bradbury came to know of Grinnell, Iowa, so I would be eager to hear from any readers who have ideas about the source of this borrowing. Likewise, if you know of more occasions in which Grinnell makes at least a token appearance in works of fiction, do please let me know!