A former colleague of mine would sometimes explain the literary meaning of "pastoral" by referring to the local newspaper. There, he said, the complex, villainous world of the modern city was absent; in its place the quiet rhythms of nature proceeded without interference. If big-city tabloids shouted "Murder" and "Crime," the local newspaper whispered the casual stories of living and loving.
At least occasionally, however, even small-town, rural newspapers must deal with unexpected, unwanted violence, and that's what happened in June 1967 in Grinnell. Against a background of the pastoral—news of weather, weddings, baseball and groceries—the newspaper headline shrieked of murder and suicide. But let's start at the beginning.


###
Sometime in the mid-1950s a local entrepreneur had the idea of building a roller skating rink in Grinnell. Apparently begun under a tent in Central Park, a more durable rink soon took form on the north side of Highway 6 just west of town (on land now occupied by Iowa Valley Community College). By 1956 groups of college students were enjoying skating parties at the rink, which gradually came to include a cafe and a small manufacturing facility.
Behind this new venture was Farrell Murphy (1908-1970) who was born near Ewart, had attended Grinnell schools and in 1937 had married Edith Smith (1902-1971), a Newton woman. Over the years the couple had operated several skating rinks in central Iowa, but Tiny Acres was the last. The rink advertised a trained chimpanzee who would routinely skate along with the visitors, occasionally stopping to help pick up someone who fell. The chimp was known to smoke cigars and cigarettes, as well as ride bikes, motorcycles and go-carts. When skaters took a break to enjoy a cold bottle of pop, they could laugh at the chimp's antics, savoring, perhaps, the pleasures of pastoral life. 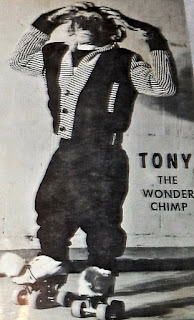 Along with the restaurant and small factory that made up Tiny Acres, Murphy decided to add some modest apartments. As it happened, at the same time Grinnell College had begun to dispense with the army barracks first acquired in 1946-47 as housing for married students who enrolled after the war. Already in 1950 the first four of the college barracks had been moved from the south side of 8th Avenue to make way for the new science building. Another four units—each containing four three-room apartments—remained standing on the north side of Eighth Avenue, east of Darby Gymnasium (where the Joe Rosenfield Center now stands).
In 1954 the college advertised the sale of several barracks. Murphy decided to purchase these buildings, and move them the mile or two that separated campus from Tiny Acres. Apparently the barracks first came into use as a motel, advertised that way in the 1957 college yearbook.
But Tiny Acres never appeared as a motel in the telephone directory yellow pages. Instead, the barracks functioned as apartments: four three-room apartments in each barrack. Although the photograph is smudged, obscuring the the roller rink, the adjacent apartment buildings (former military barracks) are clearly visible in an aerial photograph.
Apparently renters who settled here were not prosperous, as many did not have their own telephones. According to the 1962 General Telephone Directory, for example, only three of the fourteen units then occupied had telephones; in 1970 just five of the twelve occupied units had their own telephones.

###
Which may explain how in 1967 a young couple, newly arrived in town, took up residence at Tiny Acres. Bobby Gene Mullins (1946-1967), just twenty years old,  had most recently been working for A. F. Schepmann Construction Company in Okabena, Minnesota. Born and raised in Georgia, Bobby Gene had evidently pursued an itinerant life, collecting jobs where he found them.
How long he had worked in Minnesota I could not learn, but he had evidently gone there in part to take his girlfriend, Carrie Ann Black (1953-1967), away from Georgia. In Grinnell Bobby Gene was stringing wire for Southern Bell Telephone, although whether through his former employer or through some other contractor no one said.

When Bobby Gene and Ann (as she preferred to call herself) reached Grinnell in mid-June, Ann was only fourteen years old, and already the mother of a one-year-old boy, James Stanley Black. Newspapers reported that Ann had married when she was only eleven (or, according to other papers, twelve), and in 1967 was said to have been "separated" from her husband. I could find no record of Ann Black's marriage, so perhaps it was never formalized in law, given the girl's age. Her husband was another Georgian by the name of James Calvin Black.
How they met and what led to their separation I could not discover. But Calvin (as he liked to be called) left his name in the records, having collided with the police on several occasions. In the spring of 1961, for instance, he was convicted of three counts of larceny of an automobile, and served a year in the state penitentiary. In 1970 he was sentenced to three years imprisonment for aggravated assault, so Calvin was not exactly a model of good behavior.

His "wife," Carrie Ann Bryan, was born in 1953 in Bladen County, North Carolina. The Grinnell funeral record lists Fort Bragg as her place of birth, indicating that her father had probably served in the army. What later brought her to Atlanta and an acquaintance with Calvin Black and Bobby Gene Mullins I do not know. Her youthful marriage and pregnancy and the rapid dissolution of her marriage hint at a troubled life, but little else about the young mother is public.

###
These, then, were the young people who arrived in Grinnell in June 1967, playing the parts of husband and wife in a Tiny Acres apartment. The newspaper reported that there was some conflict, leading young Ann to take her baby and seek refuge in a neighbor's apartment. It was late afternoon and Ann and her neighbor, Neola Carroll (1916-1979), were watching television, the baby on the floor before them. The apartment door opened, and Bobby Gene entered, a "coverlet" draped over his arm. Ann was lying on a sofa which Bobby Gene approached, stepping over the baby, by now asleep on the floor. Bobby Gene bent down to Ann and said, "Honey, I got a present for you." He threw off the coverlet, exposing a .22 caliber pistol, and quickly shot Ann twice in the head. He then put the gun in his mouth and fired a third shot.

Neola Carroll rushed out of the apartment, screaming for her husband, yelling that "he shot her." Eddie Andersen (1911-2004), who managed Tiny Acres for Farrell Murphy, ran to the apartment with Mr. Carroll. Upon entering they found the little boy, awakened by the shots and shouting, standing by the sofa, "pulling at Ann's dress."

###
The murder-suicide at Tiny Acres was not the only crime of its kind in 1967 Iowa. Early in the year, police in Webster City had found the bodies of Mrs. Matilda Petzel and her husband, Harold, who had shot his wife to death before taking his own life (Waterloo Courier, January 3, 1967). In April folk in Lamoni learned that a Graceland College (now Graceland University) student from Iran, Hassan Rajabali, had taken a .22 caliber pistol to his former girlfriend, Sally Gladfelder, and then killed himself (Des Moines Register, April 29, 1967). And a little more than a month after the Grinnell killings, the Cedar Rapids Gazette carried a story of a retired grocer in Appanoose County who had murdered his wife before killing himself (August 7, 1967).

So Iowans were not without knowledge of events like these; they understood that the pastoral calm in which they spent much of their lives could be suddenly penetrated by a grisly killing of the sort well-known to big city folk. Still, the shock of the Tiny Acres killing caught people's attention.

And yet the victims were all outsiders—strangers, really—who had parachuted into the calm of small-town life, bringing with them the alarming detritus of the big city. Their bodies disappeared quickly from Grinnell, soon taking their rest in cemeteries far from Iowa. By the time the Grinnell newspaper published the story, Carrie Ann Bryan Black was already buried in Briar Branch Church Cemetery, Bladen County, North Carolina. 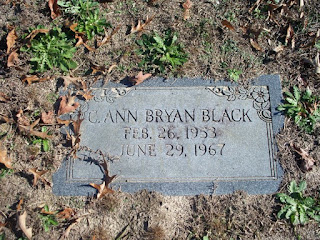 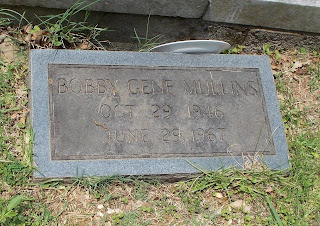 Even little James Stanley was soon gone, his grandmother carrying him to her North Carolina home where the public record soon lost track of him.

Back in Grinnell the dreadful events of June 29 soon passed from consciousness. The newspaper published no follow-up, the celebrations of the July 4th holiday wiping out the grim image of the orphaned one-year-old and his dead mother. The pastoral rhythms of nature and the countryside once more dominated the pages of the newspaper, leaving behind this rude incursion into the pastoral calm of central Iowa.

PS. Special thanks to Cheryl Neubert and Monique Shore for getting me the high-quality scan of the Grinnell Herald-Register article to replace the illegible microfilm copy, and to Steve Budd who first brought Tiny Acres to my attention.