Early last winter, while visiting Grinnell's Hazelwood Cemetery, I encountered a most unusual grave marker: fashioned out of stone or cement to resemble a tree, the marker reached skyward perhaps seven feet; the top gives the appearance of having been chopped off, and several would-be branches  likewise appear to have been sawed off; a sculptured vine circles the trunk onto which were inscribed the vital particulars of Daniel W. Brainard (1837-1919), his wife Susie Kingdon Brainard (1841-1930), and their infant son, Lewis (d. 1875). I was not the first to notice this unusual stone, as Hazelwood's Find-a-grave website confirmed. But there was nothing like this stone anywhere else in the cemetery.  I resolved, therefore, to try to learn more about the people to whom the marker was dedicated, and, if possible, why this particular kind of grave marker was erected over their remains.
Like many others who found their way to Grinnell in the nineteenth century, Daniel Webster Brainard came from the more settled northeast.  Born and raised in Middlebury, New York, he married Susan Kingdon in Stafford, New York in 1863; five years later the couple moved to Iowa, settling on a farm five miles east of Grinnell where Brainard resumed the dual careers of farming and teaching that he had pursued in New York.  In 1884 the Brainards moved into Grinnell, occupying a house at 528 Broad Street (now demolished).  Brainard  developed a business in insurance and real estate, and after 1895 became secretary for the newly-incorporated Home Loan and Savings Association headquartered at 815 Fourth Avenue, just across the street from Brainard's business office at 808 Fourth.

By most measures Brainard was a very successful man. While farming near Malcom, Brainard owned and bred champion Poland-China hogs, and later, after moving into Grinnell, he continued to raise and sell Wyandotte chickens, then still a relatively new breed.  According to the 1915 Iowa census, Brainard's insurance and realty business generated an annual income of around $500, which was not princely. Nevertheless, Grinnell College records show that he gave freely, once donating $100, even though he was not an alumnus of the college.

His intellectual interests were broad, explaining in part how for more than a decade he regularly contributed monthly weather reports for Grinnell to the U.S.Weather Service. These traits impressed L. F. Parker, who in his History of Poweshiek County called him "a thoughtful man, of wide observation." 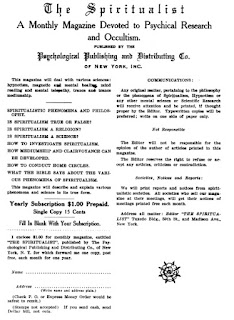 In addition, Parker continued, "In religious belief he is a confirmed Spiritualist and is fully persuaded that communication has been opened with disembodied spirits that once inhabited this world." Only a handful of Spiritualists were known to Brainard's Grinnell where the more conventional claims of the Methodist and Congregational churches dominated local religious practice. Even Brainard's wife, Susie, was raised in the Episcopal church, no doubt a legacy of her immigrant parents' Anglican roots. But Daniel, who was an associate member of the American Society for Psychical Research, evidently converted her to Spiritualism, as both their funerals were under the direction of Eva McCoy, a well-known Iowa medium.

Brainard's obituary reports that he was both a Mason and an Odd Fellow and, although unmentioned in his obituary, he also belonged to the Improved Order of Redmen as well as to Modern Woodmen of America.  The Improved Order of Redmen continues to operate, but no longer has any bases in Iowa; it appears that Grinnell's lodge (Modoc, no. 67) came into being in the late nineteenth century as an experiment and did not survive long: the last mention of the Grinnell lodge in the organization's records came in 1898.
But the Woodmen had a different and more successful history. Founded in Lyons, Iowa in 1883 (but now headquartered in Rock Island, IL) by Joseph Cullen Root, Modern Woodmen of America is a non-profit, fraternal benefit society, organized into local lodges. Originally membership was restricted to white males 18-45 in the twelve "healthiest states." Moreover, urban residents were excluded, as were those who pursued occupations judged to be unhealthy (miners, almost everyone connected with railroads, sailors, et al.), all this in an effort to protect the low-cost death benefits insurance. In 1890, Root had a falling-out with the organization's leadership, and he resigned, soon thereafter founding in Omaha, NE a rival fraternal benefits organization, Woodmen of the World. Like its predecessor, Woodmen of the World intended to blend both the social benefits of a fraternity with the financial benefits of insurance.  But Woodmen of the World offered a special tombstone benefit: beginning in 1900 members could purchase a $100 rider to their policies with which to pay for a grave marker for which the organization provided a pattern—originally a five-foot tree trunk for adults and a three-log stack for children. As costs grew, the program was abandoned in the 1920s, but by that time the tree-stump monuments had become well-known in America's cemeteries. Often, although not always, the monuments included symbols of the Woodmen—an ax, wedge and mallet—or would cite the Latin slogan of the group: "Dum Tacet Clacet" (Though silent, he speaks).

Brainard's Hazelwood gravestone strongly resembles the designs attributed to Woodmen of the World, although the stone bears none of the identifying markers frequently seen on WOW gravestones—no Latin slogan, and no ax, wedge or mallet. On the other hand, it appears that Woodmen of the World grave markers were often modified to suit the beneficiary's taste, and omitting the slogan or the logo was not unusual, so it is conceivable that Brainard used a WOW plan.

Unfortunately, however, although there is evidence that Woodmen of the World had some activity in Grinnell in 1898 (its records confirm that a certificate had been issued in Grinnell), nothing survives to connect Brainard himself with that organization; quite the contrary, as noted above, Brainard was a member and officer in the parallel organization, Modern Woodmen of America. It may be, therefore, that, even if Brainard took inspiration from the WOW designs, his stone depends upon the more common symbolism of grave markers—a topped tree trunk denoting a life cut short  (especially relevant for their infant son, who did not live to see his first birthday) and the climbing ivy may point to the immortality at the heart of Brainard's Spiritualist convictions.