One way to shake off the sense that "things were always this way" is to compare present-day uses of land with their predecessors. A case in point is the Grinnell College Botanic Garden, which from its founding around 1910 until the College gave up on it in the 1940s, occupied the plot between Sixth and Fifth Avenues, bounded on the west by State Street and on the east by the railroad. As Grinnell readers will immediately realize, no botanic garden survives there, and this land is currently the home of St. Paul's Episcopal Church.  How did that happen? Well, it's an interesting story, even if some parts remain unclear.
In 1906 Henry Shoemaker Conard accepted appointment to teach botany at Grinnell College, and with this decision, the establishment of a botanic garden began to be imagined.  Conard had been born in Philadelphia, and had done most of his schooling in the Philadelphia area. In 1894 he graduated  from Haverford College (in three years), and the following year received an MA from Haverford. For the next few years he taught at Westtown Boarding School (where he himself had been a student), before enrolling in a graduate program at the University of Pennsylvania in 1899; in just two years he received his PhD from Penn, where he then taught until he accepted the position at Grinnell.

When he arrived in Iowa, Conard was already well-known in botany circles. His 1905 book on water lilies had been very well-received, and Conard was also a Foundation member of the Botanical Society of America. It followed, therefore, that when he reached Grinnell, the College would attempt to capitalize on Conard's specialty.  As the Grinnell Herald reported in a December, 1908 article, "a special movement is on foot to secure a fund of $2000 to $5000, the income of which is to be devoted to this purpose [establishing a botanical garden]."

The proposed garden would occupy about one-and-a-half acres immediately south of Sixth Avenue and west of the Iowa Central Railroad tracks. Although fund-raising seems to have stalled short of $2000, the garden was launched under the care of Conard, "whose experience in such work," the Grinnell Herald opined, "should be a guarantee of its success." According to C. Stuart Gager's Botanic Gardens of the World, the first plantings took place in 1909, but numbered only fourteen species; the following year another 100 species were added, with progress vacillating in subsequent years.  A 1916 issue of Grinnell Review reported that "The Botanic Garden now contains about six hundred species and varieties of plants, and is the only botanic garden...maintained by any college or university in the West."

In an early report on his work, Conard expressed regret that the garden "has not yet attained notable proportions, nor has more than a quarter of the plan been realized." Nevertheless, the garden  prospered. In these first years the south end of the lot benefited from a large donation of irises from Mrs. James Hill's own garden in Salem, MA, and enjoyed additions made by the local plant nursery. Another bed along Fifth Avenue was devoted to "flowering herbs which have parallel-veined leaves—the Monocotyledons;" dicotyledons occupied other beds there.  "The arrangement of the shrub beds [on the north portion of the lot]," Conard reported, "is not yet complete," but beds in the west half were devoted to "a single family or order of plants, or perhaps a single genus or species." Apparently twelve varieties of beet occupied a single bed, and another had six species of rhubarb. Three beds were devoted to lilies and three to buttercups, allowing students to "learn what is meant by a species, a genus, a family and an order." Conard emphasized that the garden therefore was like a museum, "an open text-book."

Money remained an issue, however.  Conard used some departmental funds to supplement the $75 yearly income derived from the slim endowment, and over the years he received both private and government plant donations. In 1913, for example, the Botanic Garden received a private donation of medicinal plants, and also obtained a gift of seeds and roots from the U.S. Bureau of Plant Industry to create "three small beds nearest the north end of the botanic garden." Poison hemlock, hyssop, wild bergamot, thyme, peppermint, tansy, hen-bane, fox-glove and buckthorn were among the 42 species of materia medica.

By the time that Conard published his 1925 survey of Grinnell-area trees, he was able to document the presence of a large number of additions to the garden. For example, he noted that "just north of the tool house in the Botanic Garden" was a "thorny honey locust (Gleditsia triacanthos)," almost certainly the same tree that presently stands between St. Paul's and the railroad. But there were numerous other trees, including sassafrass, wild black hawthorn, Chinese tree lilac, wild hawthorn, several varieties of willow, and a Kentucky coffee tree. Numerous shrubs and bushes also thrived; Conard noted "a blackberry bed beside the path," beds for roses, plums, and apples; and several varieties of sumac. The result was surprisingly robust.
In the dozen or so years before Conard's 1944 retirement from Grinnell reports on the garden's well-being became more scarce. In the hard times that accompanied the Depression and World War, the already limited financing must have proven even less satisfactory. And when Conard, after retirement, left Grinnell in 1944 to accept a position as Visiting Professor at the State University of Iowa, the Botanic Garden lost its chief supporter.

Over the years when Conard was breathing life into the Botanic Garden, the small parish of Episcopalians in Grinnell was withering. Organized as a mission only in 1872 and established as a parish in 1883, St. Paul's had long depended upon clergy shared with other parishes and upon space rented in downtown buildings. In 1885 the small congregation acquired its first building at the intersection of Main and First Avenues, and, at about the same time it received its first rector. Soon thereafter, however, the rector departed and, with finances plummeting, the parish sold its property and, with the support of the diocese, purchased a small plot on Fifth Avenue, intended to be the site of a replacement building. But the small parish (numbering only 26 persons according to the 1915 Iowa census) continued to struggle; once again listed in diocesan records as only an "organized mission," in 1917 St. Paul's could barely muster the small annual assessment of four dollars, and in 1920 failed to pay anything at all. After 1923 annual conventions of the diocese no longer mentioned Grinnell.

In 1930 the diocese reconstituted Grinnell as an unorganized mission supervised by a priest in Davenport, but it wasn't until 1947, when Rev. Donald Brieland (1924-2011) was appointed Episcopal chaplain at Grinnell College, that the parish came back to life.  The diocese purchased a private dwelling at 1233 Park St. where in 1948 Rev. E. L. Haines, bishop of Iowa, dedicated the chapel (christened St. Dunstan's) and student center. Rev. Brieland, who also had an appointment in the department of speech at the college, lived upstairs. In a burst of enthusiasm over recent progress, in 1949 the bishop announced plans to build a new student center and chapel "at Fifth and State St."—that is, on the territory that had once been home to the botanic garden.

How exactly this plan was hatched remains unclear.  Bishop Haines was then a member of the College Board of Trustees, and therefore presumably had heft enough to exercise in decisions of this sort. Furthermore, at this time the Protestant Episcopal Church of the United States named Grinnell a "designated college for the Upper Midwest," perhaps as part of the deal for the old botanic garden.  But when Haines abruptly grew quite ill and then died in 1949, talk of a new chapel and student center fell quiet.

Haines's successor (as bishop of Iowa and also as member of the College Board of Trustees), Rev. Gordon Smith, soon revived the plan, with the result that in 1953 a new Episcopal chapel and student center was built on the land where the Botanic Garden had once thrived. The building—without the church proper whose realization lay in the future—was officially occupied in February, 1954, but the property was not legally deeded to the church until 1958. 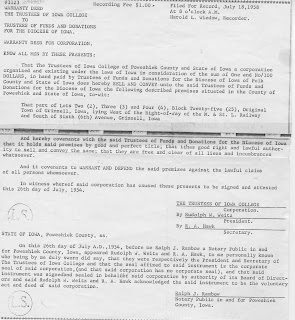 What happened to the once-luxuriant plantings of the Botanic Garden? Had the trees been cleared at some point, perhaps to make way for the Episcopal student center?  I could find no reference to any such activity in the college newspaper nor in the Grinnell-Herald in the years that separated Henry Conard's retirement from the erection of the revived St. Paul's. But a comparison between photos from the heyday of the Botanic Garden and today's church yard show that a great deal changed over time, reminding us that things weren't always the way they are now.