All the recent discussion about Central Park and its possible redesign has reminded me of earlier efforts to beautify Central Park.  Much of the discussion in the last few years has focused upon the Veterans Memorial Building, and the importance of the building as a commemoration of veterans who have served our nation at their own peril. Missing from this conversation, however, is the part played by an earlier effort at commemoration—the Clark Memorial Fountain, designed in 1910 to commemorate Dr. E. W. Clark, who, in the opinion of one of his eulogists, deserved to be paired with J. B. Grinnell in his importance to the town. In fact, the Clark Memorial Fountain was built with the voluntary donations of many of Grinnell's citizens, grateful for the part played in their town's history by a man who was much more than a doctor. 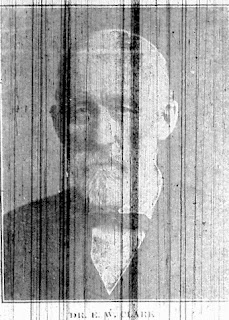 Elbert Warren Clark (1842-1910) was born in Vermont in 1842, but moved to Illinois with his family in 1854. He graduated from Kewanee High School and then entered Rush Medical College, from which he graduated in 1871, almost immediately thereafter settling in Grinnell where he practiced medicine until his death. In addition to the healing arts, Clark devoted enormous time and effort to local government: he was elected to the Grinnell City Council five times; was President of the Grinnell School Board for six years; and was mayor of the city for four years. He also served in the Iowa House of Representatives, and later served four years in the Iowa Senate.  Various local institutions also benefitted from his attention: in 1898 he was elected a trustee of Iowa College (today's Grinnell College), where he served until his death (B. J. Ricker was elected to replace him), and he was also a trustee of Stewart Public Library.

Reviewing this list of accomplishments, one begins to understand how the town felt the loss at his death in February, 1910.  "All Grinnell Mourns the Loss of a Good Citizen" read the headline of the Grinnell Herald. Calling Clark one of the "builders of Grinnell," the newspaper reported that for his funeral "factory wheels ceased to turn, business houses closed their doors and a whole city paid homage to the man who has exemplified...the possibilities of a life of service."

Soon after Clark's death a movement to commemorate him took shape.  By mid-March a group of local worthies had collected enough guarantees to begin planning what sort of memorial it should be and where it should be located.  Subscription lists were placed in all the town's banks and citizens were invited to sign up and contribute. The newspaper reported that among the planners there was "a general feeling that the people of Grinnell will be unwilling to let the opportunity to contribute to this memorial slip past."

Meantime the committee responsible for the design and location of the memorial was hard at work.  A newspaper article in mid-August reported that the Chicago architect, Walter Burley Griffin, had visited Grinnell to inspect sites, and had recommended that the fountain—an idea that was broached almost immediately after Clark's death—should be located at "the northwest corner of [Central] park"—in other words, almost exactly where the Veterans Memorial Building now stands.

Griffin had promised plans for the memorial within two weeks, but whether he met that goal or not is unclear. Still in late October the Grinnell Herald expressed hope that the fountain would be installed by November 10. The newspaper reported that the memorial would be "7 feet, eight inches in height, handsomely finished and in position and general appearance will be in every way a worthy memorial." However, another newspaper article from the following June announced that only then was the fountain nearing completion, the total cost of installation having exceeded $900.  "Three tons of cement and fifteen loads of torpedo sand and limestone entered into the construction of the fountain," the newspaper continued.
Providing more details, the paper described the fountain as occupying space "some two feet above the ordinary slope of the ground" at the park's northwest corner.  The base of the structure was nine feet on each side and stood eight feet tall at its highest point.  "The fountain is enclosed by two rims of concrete, each one four feet wide with a space of 3 1/2 feet between them which will be set out to ferns and plants." At each corner of the fountain were "basins or troughs for flowers, ferns, etc., while of the other troughs, slightly raised, on the center of the four sides, two will be used for drinking fountains and two for sprays."  Four lanterns stood over the four corners, each "enclosed in concrete cases, Japanese style."
Apparently even by summer, 1911 all was not finished, because an article in the newspaper the next July announced improvements."The lanterns on the sides of the fountain have never been according to specifications," the newspaper reported. Actually, most of the article detailed the newly-won fame of the fountain's architect, Walter Burley Griffin, who that spring had won first prize in the competition for designing a new Australian capital city.

For the next twenty years the fountain, upon which was fixed a tablet remembering E. W. Clark, provoked little comment. But in March, 1931 the newspaper announced that the fountain was to be moved to a new location in the center of the park. According to the article, "faulty plumbing" demanded some remedy; besides, reasoned the park board committee, at the new location the fountain would be "more accessible." The move was also part of a plan to reorganize Central Park: the north half would be devoted to recreation (and at the disposal of the nearby high school), whereas the south half was intended for "ornamental purposes." For its part, the fountain was to be raised higher than it had been earlier, and cement walks were to surround it, "so that it may be approached from all sides."
Another twenty years passed without much comment about the Clark Fountain. But then, summer 1954, came the announcement that the monument would be removed. The newspaper reported that the city park board thought the fountain "an eyesore [and also] a hazard to children." Apparently long neglected, the fountain's plumbing worked poorly—only one spout still worked, the newspaper reported, but even that had been the source of "several accidents" (although the account identified only one child who had slipped on the wet pavement "and opened a gash in his head").  Park board members claimed to respect "the sentiment of the memorial," but nevertheless planned to install a "smaller but safer and more sanitary" fountain.

What happened to the tons of cement that made up the fountain? No one seems to know, and apparently no one at the time cared enough to record the fountain's destiny. No doubt memory of the man the fountain intended to honor had faded—who today in Grinnell knows the life of service the fountain memorialized? But with its passing the city lost a tangible connection to a man who loomed large in the history and consciousness of early Grinnell.
Posted by Dan Kaiser at 12:51 PM