Grinnell's Connection to the Armenian Genocide

The year 2015 marks a sad centennial: it has been one hundred years since the events that much of the world knows as the Armenian Genocide (but which Turkey continues to refuse to acknowledge, much less apologize for). A century ago,Turkey was not much on the minds of Grinnellians: it was far away, and World War I, which helped give rise to the genocide, was still not formally an American concern. Nevertheless, Grinnell had a direct connection to the dreadful events then taking place in Turkey, a connection that continues to occupy a quiet spot in town.

I think about this connection often, and usually on Sundays, because what brings these events to mind is a lovely stained glass window that now lights the apse of St. Paul's Episcopal Church.  Much has been said and written about how St. Paul's acquired and moved into town the building that had originally been home to Chester Congregational Church. It is a wonderful story, and, as a parishioner of St. Paul's myself, I admit that I treasure the building and am pleased at its successful reinvention as an Episcopal church. Less well-known, however, is the stained glass window in the apse which also made the journey from Chester into Grinnell. That window, depicting "The Good Shepherd" and celebrating the fourteen-year ministry of the Rev. George H. White at Chester, connects Grinnell to the gruesome events of 1915 Turkey. Of course, there is a certain irony in the iconography: if only there had been a shepherd like that who had intervened to save all those sheep subjected to the terror of the genocide.
But we have to begin at the beginning, and that means we begin with George H. White, born in Harrisburg, PA in 1830 and graduated from Wabash College, Crawfordsville, IN in 1852. After completing seminary, White married Joanna Fisher in 1856, and soon thereafter the newly-weds left home for Turkey where they were to serve as Christian missionaries. Over the next several years, Rev. and Mrs. White worked at several mission locations, ending at Marash (today's Kahramanmaraş) in central Anatolia. Almost immediately, however, health issues interfered with their mission, and obliged the Whites to return to the United States. They reached America in 1863, and at first settled in Vermont where White held several pastorates. But in 1872 White and his family went west, accepting the invitation to become pastor of the Chester Congregational Church, a rural parish located just north of Grinnell.  By all accounts, Rev. White's  fourteen-year tenure at Chester was quite successful, but poor health continued to dog him, leading to his resignation in 1886.  The Reverend and his family moved into Grinnell (914 High Street) where they resided until their deaths—Mrs. White died in 1904 and Rev. White in 1910.

It was the Whites' children who, after their parents' deaths, wanted to memorialize them with a stained glass window. Rev. and Mrs. White had two children: Susan, who was born in 1867 in Vermont after the Whites returned home, and George, the older child, who was born in Turkey in 1861 while his parents were missionaries there. Although both children spent their childhoods in Chester township, attended rural schools, and both graduated from Grinnell College, young George retained an interest in and affection for Turkey long after the family had put down American roots. Consequently, it is through George that we find the connection with the Armenian genocide. As I noted, George attended Grinnell College, graduating in 1882—just days after the cyclone that leveled much of the campus and part of the town. He then pursued a divinity degree at Hartford Theological Seminary, and then, subsequent to his 1887 marriage to Esther Robbins in Muscatine, IA, he accepted a pastorate at the Congregational Church in Waverly, Iowa.

But the connection to Turkey still burned warmly in his heart, and therefore in 1890 the young George White, his wife, and their infant daughter left for Turkey as missionaries of the American Board of Foreign Missions—as his parents had done more than thirty years earlier.  The Board of Commissioners for Foreign Missions had only recently (1886) founded a college in Merzifon (Marsovan), north-central Anatolia, and it was to this site that the Whites were sent after an emotional and warm farewell at Grinnell's old Stone Church.
This second George White spent most of his career at Anatolia College, first as a professor and then later as treasurer, dean, and, after 1913, President, a post that brought him into intimate contact with one of the twentieth century's first experiments with genocide.
Before that catastrophe broke into the news and even before George was named President of Anatolia College, George White and his sister Susan had commissioned a set of stained glass windows to honor their parents and their father's fourteen-year pastorate at Chester Congregational. The work of an unknown Chicago artist, the windows featured a central panel of "The Good Shepherd," flanked on either side by smaller, undecorated panels; the glass was installed in the Chester Church in late summer, 1912, and can still be admired in the apse of St. Paul's Episcopal Church.
Even as the windows were being installed, Rev. White was on his way back to Anatolia College, which in truth had not enjoyed a peaceful existence within the remains of the Ottoman Empire. The Unit, a Grinnell College publication that reported on alumni, already in 1895 carried the news of a pogrom against Armenians in Merzifon, the college being spared only because of government guards. But with the rise of the Young Turks and the creation of a Turkish state, circumstances rapidly grew more threatening.

Anatolia College was, of course, a Christian outpost in a largely Muslim world. Merzifon itself was then inhabited by a large number of Greek and Armenian Christians, and this population constituted the primary constituency for the college. Therefore, when inflamed Turkish nationalism turned on the Armenians and other subject nationalities, the College was bound to collide with this new power.
There were many witnesses to the 1915 violence, but George White was one whose reports made it onto the pages of The New York Times. His tale, published after the Turks finally closed the college in 1916 and after the Whites had returned to the U.S., movingly described the misery that accompanied the raid on the college, when entire families were dispatched by ox carts to their doom. Later, according to White's account, the Turks "plowed the Armenian cemetery in Marsovan [Merzifon] and sowed it with grain as a symbol that no Armenian should live or die to be buried there. No Armenian student or teacher was left to Anatolia College, and of the Protestant congregation in the city of 950 souls, more than 900 were swept away."

Experts estimate that at least 600,000 Armenians—and perhaps twice that number—perished in the frenzy, and many more suffered through the forced-march deportations into the Syrian desert. Numerous witnesses described how the Turks prepared trenches toward which they marched male Armenian captives. There the captives were set upon, sometimes with axes, their bodies falling into the trenches prepared for them—in this detail eerily anticipating practices refined in later genocides of the twentieth century.

As I sit in the quiet of St. Paul's and gaze at the window of "The Good Shepherd," I cannot escape the irony of the iconography. Of course, George and Susan White, in selecting the theme of the stained glass window, could not have foreseen the terror that the Turks would later unleash against their Armenian subjects. No doubt the White children had in mind the faithful shepherd that their father had been to the women and men of Chester township. But in retrospect it is difficult not to wonder why there was no Good Shepherd for the hundreds of thousands of Armenians and others who perished in the cataclysm of 1915.

George White returned to Merzifon in 1919 and revived Anatolia College, but by 1921 new difficulties had arisen, and the college closed once again. In 1924, largely through White's personal endeavors and against the judgment of Mission Board Commissioners, Anatolia reopened, this time in Thessaloniki, Greece, where White completed his service as President of the College in 1934. He retired to the United States, and died in California in 1946. His body was transported back to Grinnell where he was buried near his parents, and where his wife's body joined him a few years later. The man who had survived the 1882 Grinnell Cyclone and who had witnessed the storm of the Armenian Genocide lay at final rest in the peaceful environs of Hazelwood Cemetery. 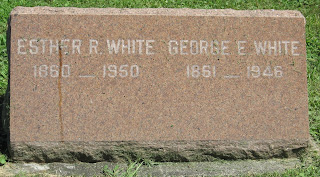